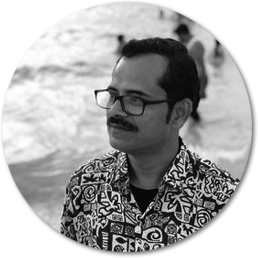 Born in 1977 in Kolkata, Arpan Bhowmik graduated from the Government College of Art and Craft, University of Calcutta in 2001. Known for his expertise in both acrylic and watercolours, Bhowmik’s largely monochromatic cityscapes have a splash of colour thrown in ever so often lending his art a surreal effect.

Having spent most of his life in Calcutta, Arpan’s works are an homage to beautiful city. His subject mostly revolves around the sights of the Kolkata city which he paints in great detail, showing his command on his medium, which is watercolor. All his paintings depict simplicity but a closer look will define the immense skill gone into its construction.

He has earned international fame and popularity among serious art collectors, art critiques, and artists.