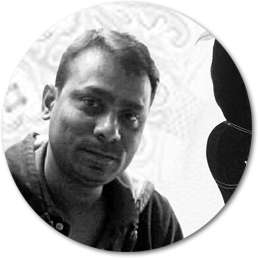 In the labyrinthine by lanes of Kolkata’s Kalighat resides Bhaskar Chitrakar, the last of the Patua painters whose family has been producing the Patachitra art unique to the area for six generations. His studio, a crowded room in his childhood home, overflows with art supplies and half-finished paintings, but affords just enough space to work on a makeshift bed.

Patachitra are traditional cloth scrolls that depict mythologies and folktales, and have been present in Eastern India for centuries. But the Kalighat Patachitra is distinctive in how it uses a rural style to pass commentary on the city’s socio-political landscape.

Not content with merely depicting mythology and folktales, painters like Chitrakar’s ancestors injected satire into their works, which proved to be immensely popular. Their paintings portrayed the babus – with their oiled hair, dhotis, hookah pipes and black pumps – as they sat spread out before their housekeepers with a vacant look. Since their cheeky caricatures were not of an individual, but rather of a lifestyle, they managed to survive without ruffling feathers.

Something immediately perceptible in Chitrakar’s work is a deep reverence for women. In Kalighat Patachitra, the babu has always been depicted as a henpecked dandy, dominated by the women in his life, which is why Chitrakar’s female subjects appear to be larger in size than their male counterparts. It is a visual trick that makes a thematic point.