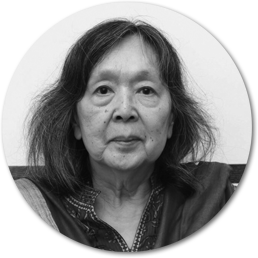 Chameli Ramachandran was born to Chinese and Indian parents at Santiniketan in 1940. Her name, derived from the jasmine flower that was popular there for its sweet fragrance, was given to her by Santiniketan’s famous artist and poet-in-residence Rabindranath Tagore.

All of Ramachandran’s works reflect her admiration for nature, a subject that has always enthralled her. Her strong connections with China and India are also evident in her paintings, which adeptly unite the lush, abundant landscapes of Bengal with the pensive, meditative quality of ancient Chinese philosophy.

Ramachandran’s sensitive compositions capture the gentle, discreet amity of natural elements such as breeze and light, as they play with leaves and flowers. The hushed rustling of the trees and the sun’s translucent rays bouncing off the soft concave surfaces of flower petals is brought to life by her masterful amalgamation of metallic pigments with ink. The evanescence of pain and pleasure may also be sensed in her works, as turbulent waves crash against lonesome rocks, coconut palms sway gently in the breeze, and lotus flowers float calmly in a pond.

The artist lives in works in New Delhi.