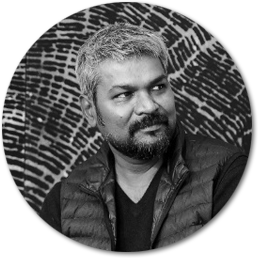 Born 1970, Karnataka, India, GR Iranna studied in a Gurukul (a system of education where the student resides with the teacher) and lived in an ashram for almost seven years. This helped him form a strong connection to his cultural roots, which is evident in his artwork. Iranna endeavors to translate an internal landscape onto tactile surfaces and aspects of Buddhist art influences are evident. Although he began painting oil on canvases, Iranna later developed his range of medium, embarking on his now primary use of tarpaulin.

Many of Iranna`s paintings depict pain as an abstract force that is translated visually in bruised textures and razor-sharp cutting edges. His painting has always been far removed from an overriding, postmodern logic. Instead, Iranna uses the idealistic, representative and modernist language of Indian contemporary art. His most recent works are all visions of resistance. In just a glance, one can tell a sense of massive dynamic energy that pervades the surfaces. An energy that is fueled by torment and the struggle against it. Upon further inspection, one sees that these conflicts being played out on the surface are present also in those between one colour and another, between figure and hue, and between the crudeness and the expertise employed.