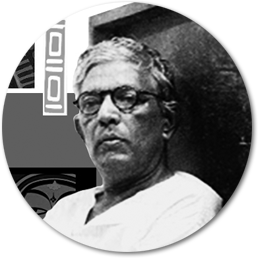 Born in 1887 in a small village in Beliatore, Bankura district, West Bengal, Jamini Roy joined the Government School of Art, Kolkata in 1903.

He began his career by painting in the Post-Impressionist genre of landscapes and portraits, very much in keeping with his training in a British academic system. By 1925, Roy had begun experimenting along the lines of popular bazaar paintings sold outside the Kalighat temple in Kolkata. By the early 1930s, Roy made a complete switch to indigenous materials to paint on woven mats, cloth and wood coated with lime. The inspiration for painting on woven mats was the textures he found in Byzantine art, which he had seen in colour photographs. It occurred to him that painting on a woven mat might make for an interesting mosaic-like surface.

Roy’s rejection of the then modern style of painting and his foray into the realm of Bengali folk paintings marked a new beginning in the history of Indian modern art. The mother and child, Radha, and animals were painted in simple two-dimensional forms, with flat colour application and an emphasis on the lines. The main subjects were often enclosed within decorative borders with motifs in the background. The figure of the Christ was also a subject that Roy often painted.

Roy held several one-man exhibitions and numerous group shows. His works can be found in several private and public collections, institutions and museums all over the world, including the Lalit Kala Academy in Delhi and museums in Germany and the United States of America.

He was honoured with the Padma Bhushan in 1955. Jamini Roy died on 24 April 1972 in Kolkata, where he had lived all his life.