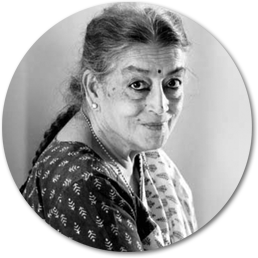 “I couldn’t contemplate working in films, though I had director Guru Dutt as my brother. We came from a traditional family, so instead I developed an interest in art.”

Lalitha Lajmi was born in Kolkata in 1932. Her works are figurative in nature – men, women, children and clowns. The concept of ‘performance’ has been a constant theme, performers not only those on stage or in the circus, but also in real life. Her early works were melancholic in nature, and her later works are more optimistic. But through the years, her works have continued being autobiographical.

In the mid 80’s, Lajmi’s work had evolved into etchings, oils and watercolours. The works of the late 80’s and early 90’s reflect the latent tensions that exist between men and women, captured in the different roles they play. She portrays her women as assertive and aggressive individuals. She has also depicted the natural bonding that exists between women, between mother and daughter figures, perhaps drawing from her own relationship with her daughter, well-known filmmaker Kalpana.

Lajmi lives and works in Mumbai.