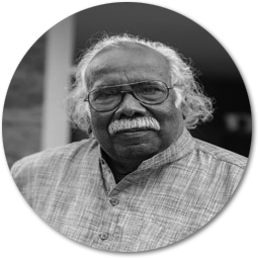 Raman lives a quiet, contented life in the same Chennai house in which he lived as a child. He has now lived there for more than sixty years, his home doubling for the last four decades as his artist studio. Raman's art has warranted him high regard and opinion as he has received twenty-nine awards, three of them international, and is collected widely.

Harking back to the design of traditional Indian art, Raman is interested in the purity of line and the ornate patterns of motifs and symbols that can be used to delineate form and tone. He chooses generally to depict figures and events in Hindu mythology though has journeyed into Christian imagery, tackling subjects such as Christ with Mary Magdalene and the Prodigal Son.

G Raman is an accomplished artist who has exhibited widely in both India and internationally. His works consist of intricate designs and colorful depiction of figures. There is a wonderful texture and energy in his work. The gamut of indigenous motifs reinvented into modernistic formalisms typical to what emerges from around the Cholamandal school. For Raman this means a classic Indian imagery with ornately voluptuous deities and graceful humans stylized on the former, where the omnipresent linear contour turns into an almost lace-like decorative tracery. Whilst such interpretation of tradition is common to many painters, Raman has found his trademark in this lace impact fortified by the contrast with the predominantly blackish background.