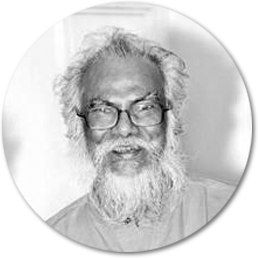 Born in 1939 in Kerala, Akkitham Narayanan studied art at the Madras College of Art and Craft, where under the tutelage of the noted painter K.C.S. Panicker his art philosophy was truly shaped. Akkitham paints geometric configurations of abstract forms. With a predisposition towards the purity of geometry, he creates a fusion of Indian tantrik art and the European geometric art.

According to the artist, geometry comes from earth, a form of universal system, where everything appears simple and straight and therefore, rigid. But if we were to look at it in subjective manner, the perspective would change. Akkitham Narayanan’s creations are abstract in character, reflecting a deeper understanding of the nature and its varied colors and moods. The forms and colors that come repeatedly in his works remind the viewer of the chanting of a hymn, reverberating with the essence of life spirit.

In late 60s, he went to Paris on a scholarship to study art and eventually settled there. His decision to settle down in Paris had made a lot of difference in the artist’s perceptions. His canvases became more and more refined. Collapsing the figures into minimal forms, he naturally arrived at the field of geometric patterns, forms and shapes. Suggestions of the elemental aspects like fire, water, air, earth and ether started playing hide and seek in constructive designs of geometrical forms. Creative experiments that spread across almost four decades have refined his visual linguistics. Despite the conscious blocking of visual narratives from within the frame, a closer look at Akkitham Narayanan’s works reveals that they are geometrical constructions, rather than ‘formless’ abstractions.