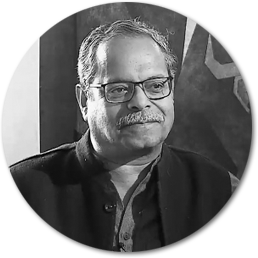 Ashok Bhowmick born in 1953 Kanpur India, is a senior renowned artist from India known for his cross-hatching. He graduated from the Kanpur University in 1973. Ashok is multi-talented artist who mastered the art of cross-hatching early in his career and sculpts and writes in additional to his passion of painting. Ashok Bhowmick was responsible for has transforming cross-hatching from a sheer technique to an independent and comprehensive medium.

Be it paper or canvas, small or large, Ashok fills the spaces with his cross hatching rendered with pen and ink. He creates the darker spaces with dense mesh of lines while lighter areas are achieved through controlled arrangements of lines. It is indeed a matter of utmost dedication that has made his paintings so exclusive that it has become his inimitable signature. The art of Ashok Bhowmik’s work is predominantly figurative.

Bhowmick has a Diploma in Fine Arts from the Government College of Arts and Crafts, Calcutta. He won numerous awards including the Governor’s Award, Calcutta in 1974. He has had solo exhibitions of his works in Mumbai, Calcutta & Delhi and has participated in several group exhibitions. His works are in the collections of the Ulemar Museum, Germany, the Modern Museum- San Francisco, Lalit Kala Akademi- Delhi and the National Gallery of Modern Art Gallery- New Delhi. Bhowmick lives and works in Calcutta.