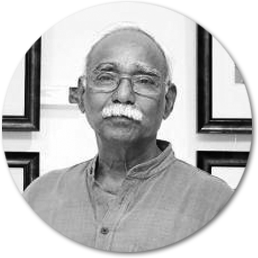 Vaikuntam’s art has a sense of strength to it, a power that emanates from the paint or charcoal that he applies to the surface, from his controlled lines, and from the fine strokes that he executes. He generally uses only primary colours, as he believes that composite colours do not exist in nature and are therefore, unnatural. As he explains, “I like using rich primary colours, which give a sense of character and depth to my paintings. Like reds and saffron and even orange, because these are essentially Indian colours. I don’t like using colours that are mix of two, because they are not natural, they don’t exist in surroundings around us, in our everyday life”.

Some recent group shows that have included Vaikuntam’s work have been ‘Indian Harvest’ presented by Crimson – the Art Resouce, Bangalore, at SG Private Bank, Singapore, in 2009; ‘The Root of Everything’ at Gallery Mementos, Bangalore, in 2009; ‘Post Independence Masters’ at Aicon Gallery, New York, in 2008; ‘6 Artists Show’ at 1×1 Gallery, Dubai, in 2006; ‘Tradition and Change’ at Arts India, New York, in 2002; and ‘Ignition’ at Crimson Art Gallery, Mumbai, in 2000.